"TO PRESERVE LIFE AND PROPERTY"

PUBLIC SAFETY
Ensuring and protecting the public's safety is our primary concern. We will do everything in our power to separate hazardous and destructive threats from:

the people that rely on us and
the property in our jurisdiction.​

PUBLIC TRUST
The public's trust is vital to the successful operation of Sam Bass Fire Department. We will conduct ourselves in such a way that we will always deserve that trust.

​​​
PUBLIC SERVICE
It is important to the Sam Bass Fire Department that our department is viewed as providing more than just emergency response. While we will always maintain emergency readiness, it is our goal that we also provide an array of services that support the well-being of our community.
​​
​

The original two fire trucks were a used 1971 brush truck that came from the oil fields and a 1946 Chevy pumper. They were housed in a 2-car garage that also served as the meeting and training facility. In 1984, the department obtained its first Class-A pumper and in the late 1980’s the Brushy Creek MUD donated a portable building that served as the first real classroom and office for the fire department.

In the early 1990’s, three bays were built at Station 1 and the previous building was donated to a local church and hauled away. Over the years, two more bays have been added, along with a conference room, foyer, and living quarters for the crews.

In the mid 1990’s, voters approved the creation of ESD 2 and in 1998 Sam Bass went from being a volunteer fire department to a combination department, utilizing both paid staff and volunteers. In 2003, an additional station was built. In February 2004, Station 2 was fully staffed and operational. In 2019 a third station was build on the north side of brushy creek.

Sam Bass Fire Department currently owns and operates eleven apparatus and has mutual aid agreements with the Austin, Cedar Park, and Jollyville Fire Departments. SBFD is staffed daily by six paid crew members (three per station), 24 hours a day, 7 days a week, operating on a 24 hours-on / 48 hours-off rotating schedule. There are currently over 30 paid crew members and a fluctuating number of volunteers.

The Sam Bass Fire Department began in 1980 as the Sam Bass Company of the Round Rock Volunteer Fire Department and was staffed solely by volunteers. There were 10 charter members at that time and the annual operating budget was roughly $25,000. All support was received through generous donations from the public. 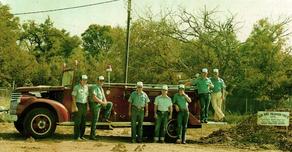